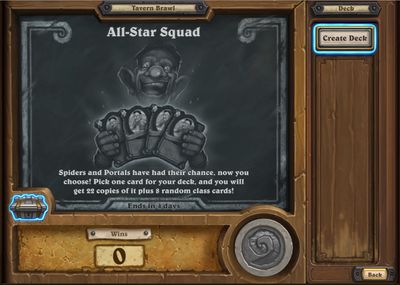 "Spiders and Portals have had their chance, now you choose! Pick one card for your deck, and you will get 22 copies of it plus 8 random class cards!"

This Tavern Brawl sees players doing battle with custom decks composed of 22 copies of one card chosen by the player, plus 8 randomly chosen class cards from the selected class.

This Tavern Brawl is essentially "Top 1" with a few random class cards stuck in. It is similar to, but not the same as, the Tavern Brawl formats of Top 2 and Top 3. Strategy mainly revolves around a single card, with the 8 other randomly-generated cards acting as random filler cards that should not see much play.

As per usual, aggressive plays are likely to be the most successful, so your chosen card needs to end the game quickly or defend against a specific aggro strategy.

These decks are for people who only care about winning.

Many of these borrow ideas from previous Tavern Brawls featuring one card, with a few new additions.

These decks can only be used in Wild versions of this brawl.