For other representations of Alexstrasza, see Alexstrasza (disambiguation).

Alexstrasza is a hero that the player can pick in the Battlegrounds game mode. 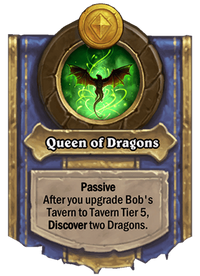 Alexstrasza's Hero Power offers a significant power spike—if you can survive long enough to take advantage of it. It provides no benefit in the early game, so your goal is to make it to tier 5 without falling too far behind on the board. Don't be afraid to branch out to other minion types in order to gain enough stats, as your primary goal is to survive until you reach your power spike. Examples of these minions include The Beast and Yo-Ho-Ogre . Pay attention to what your opponents are recruiting; if Dragons are hotly contested, you may want to transition into something else. You're better off with a stable early game than hoping to Discover powerful Dragons with your Hero Power after you've already lost too much Health and momentum to recover.

Avoid forcing dragon synergies in the start of the game unless you already have synergies, as some early game dragon and dragon synergies cards (like Waxrider Togwaggle) are very weak. Bronze Warden, Glyph Guardian, and Dragonspawn Lieutenant, in their respective tier, are exceptions as they themselves are strong early game minions. Minions like Alleycat and Murloc Tidehunter are good early plays as they generate tokens which you can sell to reach higher tavern tiers faster or to hire better minions with stronger stats. Otherwise, play to the strengths of whatever you can grab and build up towards the all-important tier 5.

You are encouraged to tier up your tavern to 5 after the turn you tier up to 4 (if possible), as you will be having your power spike earlier and will not be punished as hard (if at all) then other situations of rushing a tavern tier upgrade. If you aren't offered strong dragons after upgrading to tier 5 early, you can always look for other strong tier 5 minions like Brann Bronzebeard, Razorgore, the Untamed, or Mama Bear.

Bear in mind that your Hero Power will offer Dragons of all tiers, not just tier 5 and above. You can use this to find a third copy of a crucial Dragon you already have, which will net you another minion to amplify your power spike. Finding strong high-tier dragon like Razorgore, the Untamed or Kalecgos, Arcane Aspect . can help you transition from a early game stats build into a dragon build, especially with Kalecgos, Arcane Aspect. Keep in mind that you can always sell the Dragons you Discovered if they are too bad to generate a few extra gold for refreshes or minion purchases which benefit the build you have.