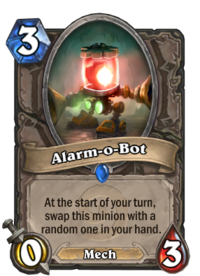 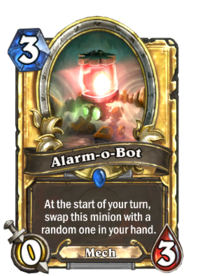 At the start of your turn, swap this minion with a random one in your hand.

Alarm-o-Bot is a rare neutral minion card, from the Classic set.

Use Alarm-o-Bot to get a minion with a large mana cost into play earlier or avoid detrimental Battlecry effects. You can place Alarm-o-Bot and at the beginning of your next turn, it will swap with a random minion in your hand. To use to maximum effectiveness, protect the Alarm-o-Bot with a Taunt and play all other minions. Keep the minion you want to place, preferably with the highest mana cost, with no other minions to guarantee the Alarm-o-Bot summon. You can repeat this over again as Alarm-o-Bot gets replaced back into your hand. This is a great way to summon high value minions for only the cost of 3 mana. Make sure to protect your Alarm-o-Bot or else his ability may not get the chance to take effect.

It is often considered a bad idea to include 2 x Alarm-o-Bot in a deck, due to the potential for an active Alarm-o-Bot to summon the other Alarm-o-Bot from your hand. It is also possible with two Alarm-o-Bots on the field at the end of the turn for the first to swap itself with another minion from your hand, only to have the second re-summon it to the field.

Even in situations where desirable minions have already been used or are unavailable, Alarm-o-Bot may still be effective to buy yourself a turn. Because of its potential to summon far greater, potentially game changing minions, it can act as a semi-effective Soft Taunt.

When Alarm-o-Bot is played, try to focus your attacks on it. It becomes useless if you are able to destroy it before it can take effect. You can also Silence Alarm-o-Bot to not only counter its effect, but also deny space on the board from your opponent. 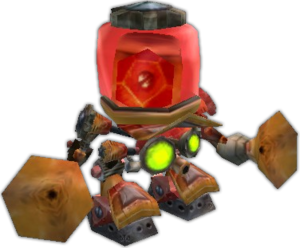 Gnomes live underground, and the natural darkness and rugged terrain of their surroundings provide ideal conditions for enemies to hide. In an effort to catch prowling and skulking creatures of all types, gnomes developed the alarm-o-bot. The small robot looks like a child’s toy with various wires and sensor arrays jutting out in all directions, enabling it to “see” in the dark. When it detects a living creature, or any sort of movement, it emits a high-pitched warning. The leper gnomes in Gnomeregan make heavy use of this device.

The alarm-o-bot’s operator can program the device to either stand in place or walk a predetermined, simple path involving no more than four turns. The alarm-o-bot cannot maneuver around obstacles; if it encounters terrain more than a few inches higher or lower, it stops moving, but remains vigilant. Setting up the bot, or changing its movement pattern, requires 5 minutes of programming and testing. The alarm-o-bot’s detection abilities are entirely visual; it cannot detect sounds. The bot “sees” any motion, heat, or even unusual shifts in air currents, allowing it to detect invisible creatures or those shrouded in magical darkness. If it detects anything suspicious, it immediately shrieks “INTRUDER ALERT!” and flashes a bright red light for 30 seconds.