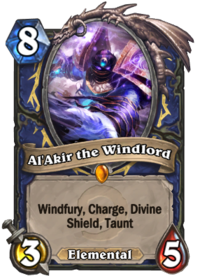 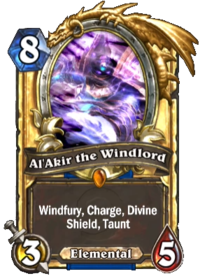 He is the weakest of the four Elemental Lords. And the other three don't let him forget it.

Al'Akir the Windlord can be obtained through Classic card packs, through crafting, or as an Arena reward. 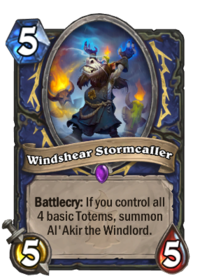 Playing this minion will be useful at almost any time, due to the many abilities he has. However, since he has Taunt it's very possible for him to die the turn after summoning, stopping you from gaining too much advantage from his Windfury. He is also vulnerable to Silence, which will nullify all of his abilities and make him very weak for his mana cost.

However, thanks to Charge, Al'Akir is especially effective for dealing large amounts of burst damage on the turn he is played. His Windfury makes him a perfect target for Attack buffs such as Rockbiter Weapon and Flametongue Totem. With no Taunts on the table, Al'Akir + Rockbiter Weapon can allow the shaman to deal 12 damage in a single turn. This combo is commonly used by shamans as a closer. In case it is not enough damage to end the game, the combo also leaves Al'Akir on the board as a Divine Shield Taunt, helping to prevent direct reprisals.

When defeating the opponent using Al'Akir is not possible, he can also be used to quickly remove dangerous or valuable enemy minions. With sufficient Attack he can remove two minions on the turn he is summoned, ideally without being destroyed himself.

Al'Akir is commonly found within Even Shaman decks due to his synergies with Corpsetaker providing it Divine Shield, Taunt, and Windfury all in one card in the addition to being a good finisher.

As a bonus, being an Elemental means Al'Akir can not only be used to activate Elemental synergy effects the next turn, but can also have his mana cost reduced by Fire Plume Harbinger. Being played a turn or two earlier can make a big difference on the impact Al'Akir can make to the board.

Al'Akir the Windlord was the Elemental Lord of air. He ruled over his domain of Skywall from his seat at the Throne of the Four Winds. He was once the foremost tactician in the Old Gods' horrific armies. Aligned with the corrupted Dragon Aspect Deathwing and his fellow Elemental Lord Ragnaros the Firelord in their efforts to usher in the end of days, Al'Akir was defeated by the mortal champions of Azeroth, who were able to enter Skywall from the breach in Uldum and destroy the Windlord within his own sanctum.

However, when the developers examined the alpha's backend stats, Al'Akir was found to in fact have the highest win rate of any legendary in the game at that time. The developers therefore realised that the card was simply under-appreciated, and quickly reverted the planned changes to the card, avoiding making "a pretty terrible mistake".[1] This was the first time the developers used "hard data" to inform balance changes.[2]