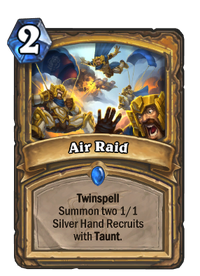 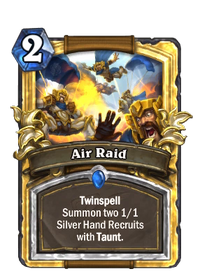 It's difficult to get an air raid together. You have to get twenty-five people, and they all want to play a paladin!

Air Raid is a rare paladin spell card, from the Galakrond's Awakening set. 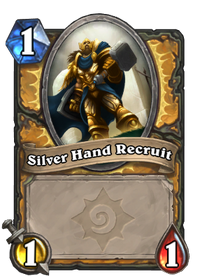 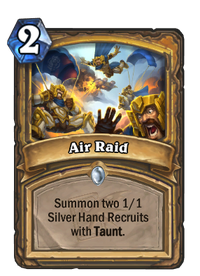 While the two 1/1s with Taunt might not seem very good, Air Raid has a few distinct advantages. It summons 2 minions, which can help zoo-styled Paladins. It has Silver Hand Recruit synergy, which is significant for certain decks. Since the card has Twinspell, it also has card generation to provide fuel on future turns. With these in mind, this card has above-average value from the early game to as mid-late game.

Air Raid is a good follow-up to Sanctuary when played early, since it protects your hero from two attacks twice and makes it hard for your opponent to prevent the Sidequest's activation. It's also a good card to trigger Righteous Cause, providing 4/5 minions on its own.