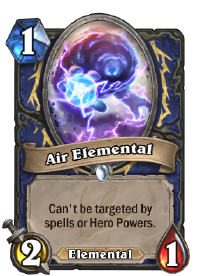 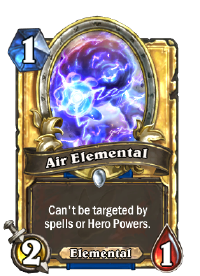 Air Elemental is a common shaman minion card, from the Journey to Un'Goro set.

Air Elemental can be obtained through Journey to Un'Goro card packs bought through the ingame Shop, purchased online from the Battle.net shop, or through crafting.

As an Elusive 2/1 for 1 mana, Air Elemental can be played on turn one to threaten early 2 health 2 mana minions, without the drawback of being vulnerable to single damage pings such as Fireblast or Mortal Coil. However, keep in mind that its Elusive ability doesn't protect it from Shapeshift or Dagger Mastery.

If not drawn early, Air Elemental can serve a secondary function as a cheap way to trigger Elemental synergy throughout the game.