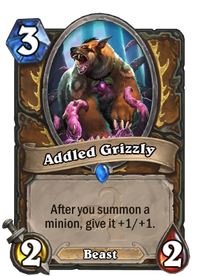 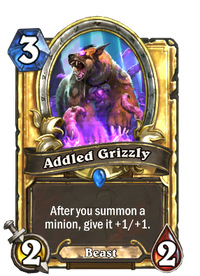 Druids who spend too long in bear form are more susceptible to the whispers of the Old Gods. Right now they are whispering the lyrics to "La Bamba".

Addled Grizzly is a rare druid minion card, from the Whispers of the Old Gods set.

Addled Grizzly can be obtained through Whispers of the Old Gods card packs, or through crafting.

This would fit well in a deck with lots of small minions, steadily buffing them as they are summoned. Make the most of this minion by playing it immediately before several other minions. Spells such as Wisps of the Old Gods or minions such as Bilefin Tidehunter that summon other minions will activate the effect for each minion.