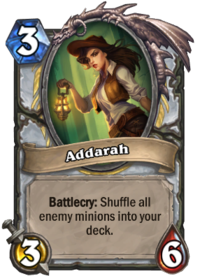 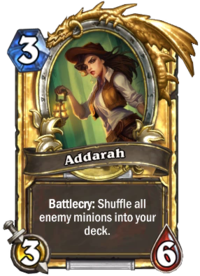 Battlecry: Shuffle all enemy minions into your deck.

Addarah is an uncollectible priest minion card used in Tombs of Terror. It is one of Elise Starseeker's signature treasures.

It is unlocked by dealing 50 damage to any Plague Lord. 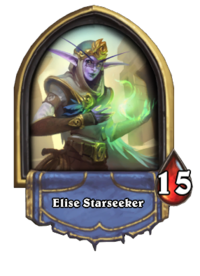 Summon
I've found a few treasures in my time.
Attack
Stand aside.

This minion's name is probably a misspelling of Adarrah, a character who appears in Uldum alongside other zones.

Adarrah is a human woman who has been seen by adventurers all across Azeroth and even beyond. She appears in quest lines in several different zones. Her storyline is often entwined with those of other recurring characters, including Harrison Jones and Budd Nedreck.