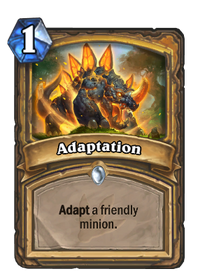 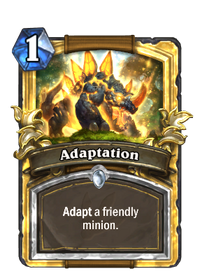 Pray for salvation. If that fails, pray for extra horns or bigger teeth.

For the Keyword Adapt, see Adapt.

Adaptation is a common paladin spell card, from the Journey to Un'Goro set.

Adaptation can be obtained through Journey to Un'Goro card packs, or through crafting.

Adaptation is comparable to Hand of Protection and Blessing of Might. While Adaptation is able to achieve the effect of both these cards, Adaptation is slightly less consistent. Adaptation does make up the inconsistency by having synergy with Wild Pyromancer, being able to clear the board for 3 mana 1/3 of the time.

This card is a decent and versatile spell. While its effect is weaker than most 1-mana buffs, it makes up for that by providing a large number of options. It also synergizes with The Last Kaleidosaur.

The Adaptation effect is not very effective, but it can provide a bypass for good minions that lacks some specific traits, like Wax Elemental plus Flaming Claws or Goldshire Footman plus Volcanic Might.

Being a low-cost spell also makes Adaptation perfect in a deck with Prismatic Lens, as the minion drawn will cost 1 mana.