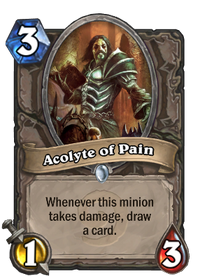 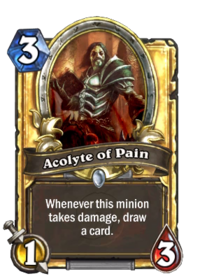 Whenever this minion takes damage, draw a card.

He trained when he was younger to be an acolyte of joy, but things didn’t work out like he thought they would.

Acolyte of Pain is a common neutral minion card from the Hall of Fame set, formerly from the Classic set.

Acolyte of Pain can be obtained through crafting only.

Acolyte of Pain is a minion with a card draw mechanic. Any effect or attack which deals damage to the minion will cause the controlling player to draw a card, even if the damage kills the Acolyte. The Acolyte is therefore best defeated using a destroy effect which directly destroys the minion, without dealing damage to it. If this is not possible, defeat him with a single strike, so that only one card is drawn.

Unlike most minions, the aim of playing the Acolyte is not to keep him alive; rather it is to deal him damage as slowly as possible, drawing as many cards as possible. Ideally, ensure that he receives damage a single point at a time, and if possible heal or buff him so as to extend his life. Attacking 1 Attack minions is an excellent use of the Acolyte.

Mages can damage Acolytes directly through their hero power Fireblast, allowing them to directly trade 2 mana for a new card. While this ensures good draw (as long as the Acolyte isn't killed by another source in the meantime) it is also costly, with a total mana cost of 5 mana for 2 new cards. Using the Acolyte to destroy 1/1 minions is a cheaper and far more beneficial technique.

This card is a strong addition to Patron Warrior decks, which contain many cards that can deal one point of damage to it.

Summon
Let the pain speak to me.
Attack
Bring the pain!
Death
Yesssss... 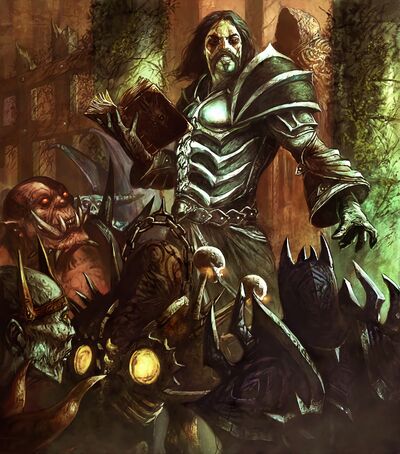