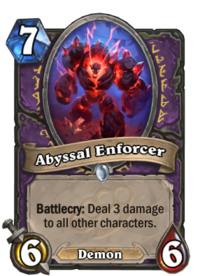 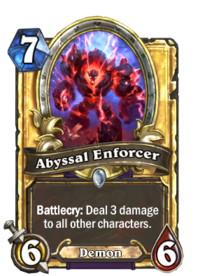 Battlecry: Deal 3 damage to all other characters.

The Kabal print this on every package of illicit Mana Crystals: WARNING - DO NOT PUT WITHIN REACH OF ABYSSALS. THIS IS NOT APPROVED FOR USE BY FLAMING DEMONS OF ANY KIND.

Abyssal Enforcer is a common warlock minion card, from the Mean Streets of Gadgetzan set.

Abyssal Enforcer can be obtained through Mean Streets of Gadgetzan card packs, or through crafting.

A strong card, combining a decently sized minion with a Hellfire-like effect. Be careful of the self-damage, both to you and your own minions.

The Abyssal Enforcer is best suited for control-oriented Warlock decks, who can use its effect to clear the board and help stabilise.

Abyssals are demonic constructs similar to infernals, but made from rougher, more jagged material. Their flames can be either red, green or even blue. The ritual to summon an abyssal is complicated and often fails. When a failure occurs, a small piece of the demon typically remains behind, seething with a combination of latent demonic rage and despair at its own dysfunction. Ancient battlegrounds are littered with such stones.

Their white-hot cores can be useful as a compressed fuel source.