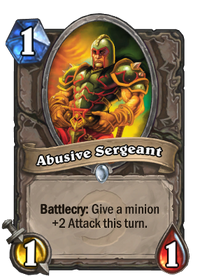 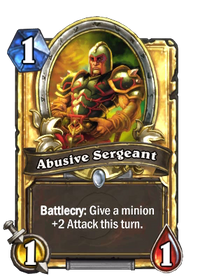 Battlecry: Give a minion +2 Attack this turn.

ADD ME TO YOUR DECK, MAGGOT!

Abusive Sergeant is a common neutral minion card, from the Classic set.

Abusive Sergeant can be obtained through Classic card packs, through crafting, or as an Arena reward.

Two copies of regular Abusive Sergeant (Core) are obtained for raising sum of all your class levels to ?.

Two copies of golden Abusive Sergeant (Core) are obtained for winning 500 games across all classes.

Abusive Sergeant (Core) is uncraftable and cannot be crafted or disenchanted.

Abusive Sergeant is a staple of aggro decks and zoo decks, granting an unexpected damage boost that can help kill an opponent or their defences without warning. As its Battlecry effect only lasts until the end of the turn, it would be wise to apply the +2 Attack bonus to a creature who can do the maximum amount of damage during that turn while trying to minimize loss in short term and long term scenarios. This works especially well on creatures with Windfury as they are able to deal their Attack damage twice (including Abusive Sergeant's Battlecry bonus), essentially doubling the potential damage gained from this effect. Abusive Sergeant is useful for giving Attack to 0 Attack minions that normally could not attack, like Nerubian Egg or buffing enemy minion before casting Betrayal on it.

The Attack bonus can also provide more uses beyond increasing the damage output of your minions. Crazed Alchemist and Reversing Switch can swap the temporary +2 Attack into a permanent +2 Health. Similarly, Void Terror can be used to permanently add the +2 Attack to its own stats. Targeting enemy minions with the Attack bonus can make them targets of cards like Big Game Hunter or Shadow Word: Death.

Summon
Get in there and fight, maggot! 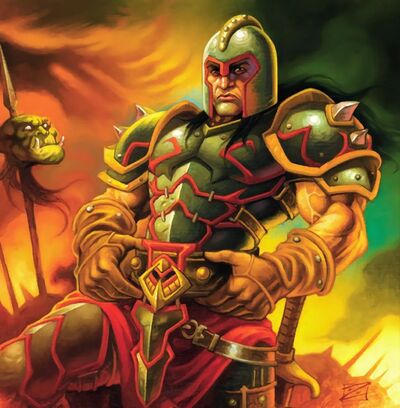 Commentary: Aggressive decks are stronger than we would like right now, and Abusive Sergeant is in virtually all of them. We like that Abusive Sergeant is available to players using minion heavy strategies, but neutral cards in the base set should be narrow enough that they aren’t showing up in such a wide variety of circumstances. We’re changing Abusive Sergeant to be a 1/1 so the battlecry becomes the clear focus, rather than the card being a reasonable turn one option for all aggressive deck types.