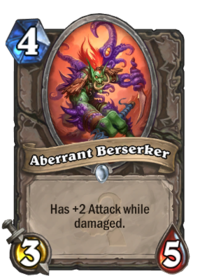 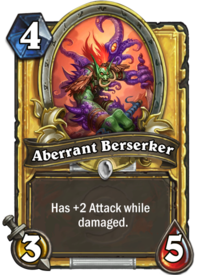 Has +2 Attack while damaged.

I berserk, therefore I am.

Aberrant Berserker is a common neutral minion card, from the Whispers of the Old Gods set.

Aberrant Berserker can be obtained through Whispers of the Old Gods card packs, or through crafting.

This minion works very well if you have a way to deal 1 damage to it, like the Mage's Fireblast, or various Warrior cards like Ravaging Ghoul, Cruel Taskmaster or Blood To Ichor, though even while enraged it is still a lackluster 4-mana 5/4.

Summon
It's time for a lot a' blood.
Attack
Hah! Kill them all!

This is the corrupted version of Amani Berserker.