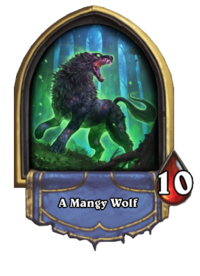 A Mangy Wolf is a boss that can be encountered during the Monster Hunt.

This mangy wolf plays a beast training hunter deck based on getting his beasts as big as possible. As long as you play aggressively while making sure his dudes don't get too big, he should be pretty easy.

A Mangy Wolf's are weak and may only require one damage to kill. To win fill up the board and rush the boss down. If it plays any minions, deal with them.

Having many low cost minions in had, flood the board as soon as possible. Remember that your hero power can also help in disposing of minions.

Toki relies on RNG, you can use it to your advantage with cards such as Mad Bomber when combines with your hero power. While things won't always go your way, meet it's minions with yours. Don't let the boss flood the board.

As long as you kill his Timber Wolf and Dire Wolf Alphas, you can start building a board until you overwhelm it.

A wolf in Gilneas is unheard of and this Mangy Wolf could be the only one.