His undead army must be stopped. Heroes gather to defeat the Lich King!

A Fateful Encounter is a boss encounter found in the Knights of the Frozen Throne missions. It is the first and only encounter of the first wing, The Prologue. 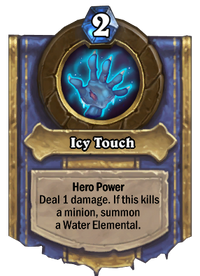 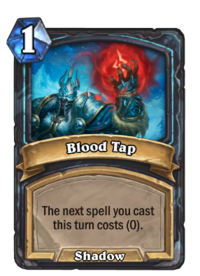 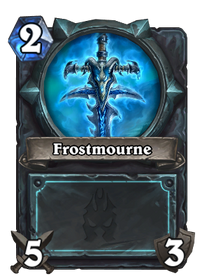 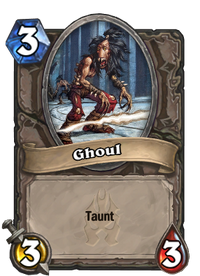 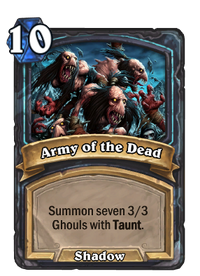 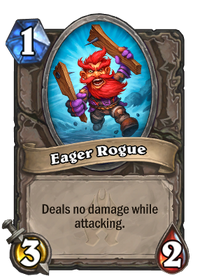 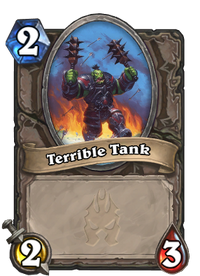 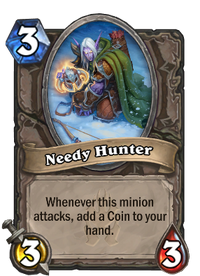 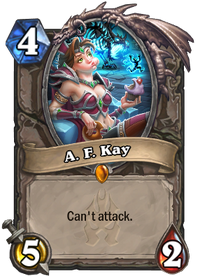 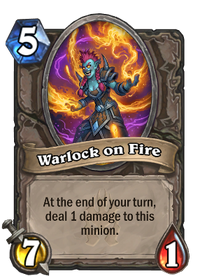 The class column in the tables below is included purely for reference, and have no effect on the boss' use of the cards during the battle.

The Lich King visually has a full deck and appears to draw cards each turn. However, his remaining card count remains equal, so despite the visual effect these cards are put directly into his hand. Because of this, and because he kills the player by the third turn using only four cards, most of his actual deck is unknown.

Tirion Fordring has a normal deck; however his starting hand, his first two draws, and his first five plays are all pre-determined.

Jaina's starting deck contains only cards with a Mana cost of 4 or more, making them unplayable throught the first part of the mission. However, on turn 3 the player (similar to the Lich King on all turns) does not really draw a card: despite the visual effect the Magma Rager "drawn" is actually directly generated and does not come from the deck.

For the second stage of the fight, Jaina uses a 25-card deck; now the Lich King give you a very strong Death Knight card every even turn up to and including 10.

The Lich King
Icecrown! Come for the terrible power. Stay... because you're dead.

The Lich King
Come, champion! I will annihilate you and disenchant you for Arcane Dust!

The Lich King
Choose your cards carefully. You have been dealt your last.

The Lich King
My cards are so good...

The Lich King
Your pleas for mercy ring hollow.

The Lich King
Go ahead. End your turn, so that I can end you!

Tirion Fordring
Have no fear, champion! We are on our way.

The Lich King
Behold my power. *Plays Blood Tap and Army of the Dead* Hahaha - THAT's my opener! This isn't even my aggressive deck.

Tirion Fordring
We're almost there! How are things going? Good?

The Lich King
None can save you. My power is absolute.

The Lich King
Your ranking will suffer.
Tirion Fordring
Hold fast, champion! Have faith that providence will deliver in your time of need.

Jaina Proudmoore
*Draws Magma Rager* Are you serious right now?
The Lich King
You, too, will serve.

The Lich King
Rise up, mage. Your work is not complete. *The Lich King revives Frost Lich Jaina* Join me. The living will tremble and the dead will obey.

Tirion Fordring
What is this? What have you become!?

Tirion Fordring
I don't even know you anymore!

The Lich King
Now, champion, clear this worthless trash from my doorstep.
Frost Lich Jaina
I hear the whispers... of the dead...

Tirion Fordring
You face the finest adventurers of Azeroth!
Eager Rogue
I got this!

Terrible Tank
Where are my heals?
Tirion Fordring
Why aren't you taunting?

The Lich King
My hordes of undead are yours to command.

The Lich King
Make them suffer.

The Lich King
Mercy is for the weak.

Tirion Fordring
Hero, your will is your own. Turn against the Lich King's call! *Turns Jaina back to normal*
Jaina Proudmoore
We must... resist...