A Cavalcade of Brawls! 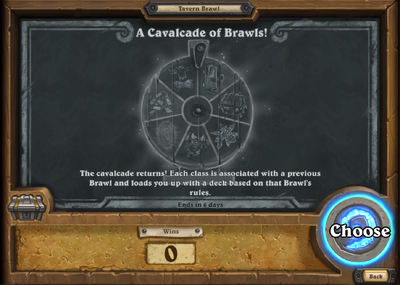 "The cavalcade returns! Each class is associated with a previous Brawl and loads you up with a deck based on that Brawl’s rules!"

This Brawl presents a reprise of nine previous brawls. The player's choice of class determines which brawl they will play, with each player bound to a separate set of rules. Each player receives a pre-constructed deck.

* The version of Banana Brawl! used by the warrior class in this Brawl grants several bananas per minion death. The original version only granted one.

The warrior Brawl, Banana Brawl!, is supposed to give a variety of helpful banana cards to the warrior whenever its minions die. However, it often gives bananas to the opponent when their minions die as well, allowing them to benefit from their own Brawl mechanics as well as the warrior's.[1][2][3][4] This was fixed in the brawl's second appearance.

For strategy on how to effectively use each Brawl mechanic, see the original Brawl pages. Read on for a discussion of relative strengths and weaknesses of the classes due to their Brawl.

The Brawls that provide lots of extra value per card or offer extreme mana cost discounts tend to be most competitive. The hunter and priest Brawls are potentially very powerful in the early and mid-game due to cost reductions, while rogues have a strong advantage in long games due to the extra value from each card, allowing these classes to lead the pack. Shaman's Brawl-specific cards and cost discounts have the potential to give them a decent showing as well, and when the warrior Brawl is working correctly (see Known bugs), their bonus cards can provide enough value to keep them in the running.

Other Brawls offer much smaller advantages based on ordinary collectible cards. With the middling card quality due to random selection and no additional sources of value, it can be difficult to overcome the more dramatic Brawl effects. Mages have a discount on most minions, while warlocks start with two extra mana crystals, but each is dependent on randomness for good cards. Druids have better card choices than normal, but the effective extra cost of 1 mana per card makes it hard to stay in the game.

Finally, the paladin Brawl has highly random effects. Some may win the game, while others end up helping the opponent or doing nothing at all. It provides an ever-changing experience but is not consistent compared to the stronger Brawls.

Hunters and priests both tend to work well aggressively. Randomonium's cost reduction can allow a hunter to get large minions on the board quickly and rush down the opponent before they can respond, with Steady Shot helpful to finish them off. Cloneball! has Offensive Play to reduce costs as well, allowing priests to play expensive legendary minions earlier than normal for a similarly aggressive attack. However, if the early attacks are countered, the mechanics do not provide too much additional value into the late game. Priest has a slight advantage in this regard by having all legendary minions, which tend to be higher in cost and power - but this is by no means a guarantee.

Rogues on the other hand get increasing amounts of value in the long run from Valeera's Bag of Burgled Spells. If a rogue is lucky enough to have situationally useful spells early, the extra minions can give them an early start, but their real strength is built up as spells become more useful and affordable in the mid and late game. Every spell is essentially worth double its mana cost by both producing the spell effect and dropping a minion. Unlike random spell effects, random minions are almost always beneficial when summoned for free, even ones normally considered low quality. Furthermore, the fact that the minion is always of the same cost as the spell means that the value of this bonus effect remains comparatively high into the late game. While a rogue may be "stuck" with a few spells that are hard to use well or even unplayable, the high amount of value per card nonetheless tends to give them the advantage in any game that goes long enough. Its weakness is in the early game where it may be forced to play cheap spells for little effect just to get random minions on the board.

Shaman do not get as strong an effect from Party Portals!, but the discount provided by Mark Moonwalker gives them a decent tempo boost. Additionally, the presence of Party Portal! in shaman decks gives them the chance to summon minions with very good stats for little cost. Like priest and hunter, this can win them the game when played aggressively.

Warriors receive extra value with every minion played from Banana Brawl!, in the form of multiple bananas: Bananas, Big Banana, Rotten Banana, and Deviate Banana. While individually weak, the large number of them per minion death is significant, while their cheap cost makes them easily playable and versatile once a supply has been developed. However, since the banana supply depends on minions dying and usually rely on minions being on the board, it can be difficult for warriors to develop a board presence in the early game before they are put under pressure. They are also vulnerable to board clears, since many minion deaths at once will tend to clog the hand, wasting bananas and preventing them from drawing new cards.

Druids have the Idols of Azeroth deck - all Raven Idols - which gives them high availability of good cards by getting to choose each card themselves. However, each comes at a cost of one extra mana. The improved card quality and ability to select situationally useful cards may outweigh the extra cost, although it may be hard for the druid to keep up with early game tempo. The Jade Idols also do not provide any additional bonuses beyond the cards selected, giving them less overall value compared to others.

Warlock's ShiftCon is fairly weak since they must wait for Shifter Zerus to shift into a good card at the right price. While they start with an extra two mana crystals, this is not enough to overcome the inherent weaknesses of waiting for random cards. With no bonus value for any card played, it is easy for warlocks to to be out-tempoed early or out-valued late.

Mages are in a similar position with Too Many Portals!. While the steady supply of Unstable Portals provides a wide variety of minions, the discount provided is small, or even nonexistent when a cheap minion is generated. Unlike Shifter Zerus, mages must pay the Portal cost for each minion before even seeing what it is, and once generated have no way to replace it with a better one if the card is low quality. With the initial Portal cost overhead and low number of early options, mages take time to get in the game, and the "only average" minion quality causes them to fall further behind as it continues.

Paladin's 'Servant of Yogg-Saron' Tryouts can provide many random effects with each minion played. Since the bonus spells range from very helpful to pointless to outright detrimental, they cannot be relied on to help paladins come back from weak positions, and can sometimes even sabotage an advantage developed early. On the other hand, sometimes they practically win the game. Playing a paladin in this Brawl is essentially a toss-up.