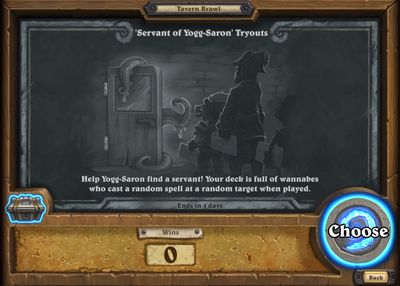 "Help Yogg-Saron find a servant! Your deck is full of wannabes who cast a random spell at a random target when played."

Additionally, 'Servant of Yogg-Saron' Tryouts was one of nine Tavern Brawls featured as part of the 100th Brawl, A Cavalcade of Brawls!. Its mechanics were used by the paladin class.

This Tavern Brawl sees players doing battle with randomized decks, consisting entirely of minions. Every time a minion is played, a random spell is cast, with targets selected at random, similar to the Battlecry of Servant of Yogg-Saron, but with no limit on the mana cost.

This is arguably the most random Brawl yet, featuring a far larger RNG element than even Encounter at the Crossroads or Randomonium. The heavy and game-determining influence of the spells that are automatically cast each turn makes planning difficult, often outweighing the importance of good tactical choices, and makes the outcome of any plan impossible to know in advance.

The one area that can be reliably controlled in this Brawl is the choice of class. This affects not only the Hero Power but also which class cards will be included in the deck.

Below are some tips to bear in mind while playing. However, for the most part success in this Brawl is out of your hands - the best strategy is usually to sit back and enjoy the ride.